Tumbra is administratively divided on several levels; macro-regions, which are general geographic regions used to determine government services such as the Circuit Courts of Tumbra and Federal Emergency Management Authority resources.

The 5 macro-regions of Tumbra are named after geographic directions, and roughly correspond to the cultural subdivisions of Tumbra. This level of administrative division is mainly used for the Circuit Courts of Tumbra, as well as census divisions. 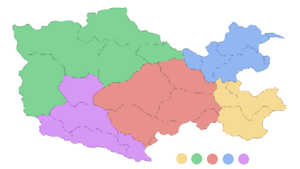 The 25 states of Tumbra are officially the first-level of administrative divisions in Tumbra. On the federal level, states are used for apportionment of parliamentary and Senate seats, as well as more targeted economic programmes. This is the highest level of devolved government - each State has a provincial government with a parliament. The heads of government are called Premiers, while the heads of state are called Governors. Similarly to the federal level, there are no term limits on Premiers, while Governors serve six-year terms, concurrent with the federal President.

The 25 states of Tumbra are further divided into 88 sub-regions. The most populous state, Napier, has 7 sub-regions, while the three free city-states are not subdivided. Before 1998, this level of division was the highest level for local government, and most municipal services were administered on this level. Since 1998, the sub-regions are largely used as general state sub-divisions for state governments. One notable use of these sub-divisions is for law enforcement and emergency service provisions; as these matters are largely devolved to the state governments, these sub-divisions are used to provide said services.

Since 1998, local government has been administered by Local Government Authorities, or LGAs. There are a total of 147 official LGAs, along with 3 more - the cities of Straton, Harren and Bencoolen, whose state governments simultaneously administer the functions of Local Government Authorities. These LGAs largely handle municipal matters, such as waste collection, libraries, elder care and registration for licenses. LGAs are a fully devolved matter, though the Federal Ministry of Local Government exists to co-ordinate the actions and standards of the LGAs.

Retrieved from "https://nssports.miraheze.org/w/index.php?title=Administrative_divisions_of_Tumbra&oldid=21443"
Category:
Cookies help us deliver our services. By using our services, you agree to our use of cookies.