Namiri is the southwesternmost electoral district in Zwangzug. It can also refer to the slightly larger cultural region corresponding to the temperate rainforest in that area. (This article will mostly refer to the latter, with exceptions noted.) 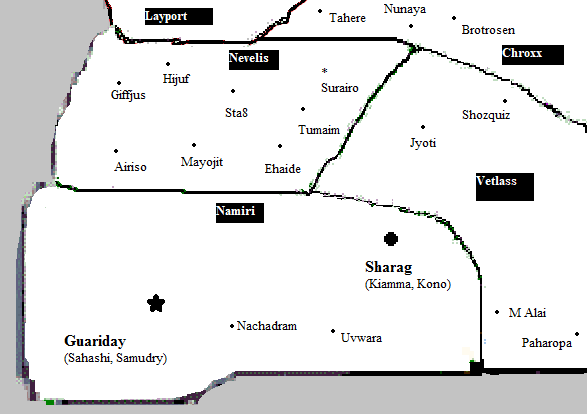 Map of the greater Namiri region. There is no formal definition, but besides the eponymous district, it is variously considered to comprise most of Nevelis (but not any of Layport), the western part of Vetlass, and occasionally the city of Tahere in Chroxx. Paharopa, in Vetlass, is where the Alai Mountains (the southern border of the map) meet the Rackham Range (running north-south at approximately the eastern edge of the map); anything east of that tends to be lumped in with the Russophone "south."

To understand the significance of Namiri's historiography, it is important to consider that the area now known as Zwangzug did not have a unified "national" identity for many centuries. It is believed that historic Unker settlers who crossed the Alai Mountains were the first residents of Zwangzug, but their presence was not permanent. Around the sixth century AD, however, the Namiri region was populated by the people whose descendants are considered the modern Namirites. Legend has it that the proto-Namirites were fleeing an oppressive monarch who demanded more rice than was humanly possible for the humble commoners to produce, under the leadership of a wise adviser to the king who realized the folly of his leader's ways; more cynical sources suggest the demand for foodstuffs was somehow the advisor's fault and he was bailing. (This event is occasionally dated to the year 512, however there are no precise records for this and it is likely folkloric at best.) In any case, it is clear that the Namiri rainforest was inhabited at a time when the rest of what is now Zwangzug was not.

The Namiri culture would continue to flourish in isolation, but did not expand far beyond the rainforest. Meanwhile, later arrivals--refugees fleeing tragedy, utopians looking for a fresh start, or some of each--would colonize other parts of the larger area, with little shared culture until the rise of the "second-generation" cities.

During the Consolidation, the "veterans" of the disturbance in Zwischen spread out from the northeastern city and attempted to unify their neighbors into a centralized state. Jorvelk being closer to Zwischen than Namiri is, the consolidators reached there first. Many of the Jorvelki recognized the threat a united Zwangzug would pose to their cultural identity and chose to sacrifice regional tradition for the hopes of ethnic solidarity, relocating en masse to Sharag and its environs. Eventually, however, the consolidators did arrive in Namiri, however, and incorporated it into the nascent country. Whether or not there were obvious borders to prevent further progress (geography is hard, especially the anachronistic kind), further progress stopped there.

Pratibha Bhave was Namiri's delegate to the parliamentary portion of the Consolidation. When the borders of the districts were being set, she argued--fairly successfully--for an independent "Namiri" district keeping its name and most of its cultural sphere of influence (though some spilled over into what is now the districts of Nevelis and Vetlass). Although the consolidation sometimes aimed (and in Jorvelk's case largely succeeded) to cross-cut existing "regional" boundaries and forge new sub-loyalties instead, Bhave benefited from most of her colleagues not knowing how populous the Namiri region was, and having to take her at her word when she warned them that attempting to split it up would create backlash. As the modern state took form, Bhave led a pro-environmentalist faction that tried to focus government power on protecting the natural diversity of the rainforest. This eventually became the Liberal Conservative Party.

In recent times, the status of Namiri as an "indigenous" area has become a political flashpoint. Zwangzug is far from the only nation in the world to have an ancient rainforest in its southwest, or for its rainforest to be inhabited by nearly-uncontacted peoples averse to modern technology, and/or extremist environmentalists urging treehouse-dwelling. And considering that Namiri was, indeed, the first part of the country to be permanently populated, the descendants of those original rice-less peasants have as much claim to the title of "native" Zwangzugians/Zwangzugites/whatever as anyone. However, the implication that the Consolidation was a colonialist project, as promulgated by Sameep "Dances-With-Zebras" Trier, is disputed. Some Namirites and other far-left identitarians see this as obvious; others consider the unification of Namiri into the larger state as no different from that of other linguistic/cultural enclaves, and dismiss Trier as attempting to impose foreign narratives of oppression and injustice on the steadfastly utopian state.

Recently, an isolated tribe of sentient zebras did in fact emerge from the southwestern forests; whether any of them actually dance with Trier is also disputed.

The Namiri region is a temperate coniferous rainforest, with higher levels of precipitation than most of the country. Sharag tends to have milder temperature extremes than other large cities. To the south, the Alai Mountains form(ed) the border with Unkerlantum. Guariday is both the capital and largest city of Namiri District. 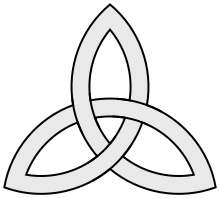 The triquetra has been adopted as a symbol of Hinduism in Namiri.

The Namirite ethnic/cultural group is generally considered to be comprised of three subgroups; the Jojie are the most numerous, with the Junba found more towards the deep south and the Swash more towards the (relative) east. Their languages have some mutual intelligibility, but also structural differences suggesting that their overlap is more a modern than evolutionary phenomenon. There are also smaller groups such as the Feegha, known for their decorative kites and drum music, who may appear superficially similar from an outsider perspective, but fall under the more general category of "southwestern" rather than "Namirite" per se. In addition, the Jorvelki remain a noticeable population group within the Namiri district.

The greater southwest boasts a great deal of religious diversity relative to Zwangzug as a whole. Hinduism is the most common religion in Namiri, followed by Islam; Sikhism, Jainism, and the Bahá'í Faith have fewer adherents, often on a regionalized city-by-city level. The triquetra symbol, as well as fire, have become important Namirite representations of the interlocking forces of creation, preservation, and destruction, represented in Hinduism by the trimurti.

The Ashahnemas are a collection of Namirite folktales considered to be an important part of Zwangzug's cultural heritage. The Descriptive English translation considered most "authoritative" is the archaic Holtz-Schmidt one, which has been criticized for sounding unduly "old-fashioned" and off-putting, whereas the actual folktales continued to evolve into the vernacular. More recently, Leila Schenbren's new translation has been praised for its accessibility, but also criticized for its occasionally callous approach to violence and death, with some adults questioning its wisdom as a school text.

Both the Ashahnemas and the rainforest itself were included on a "World Heritage" list. As part of that process, Sharag created a new museum and became known as the "gateway to the southwest."

Like much of the rest of the country, Namiri fans hopped on the bandwagon when the Zwangzug national football team unexpectedly made the semifinals of World Cup 36. Namirite fans, in particular, were impressed by the radical environmentalism and left-wing politics of the finalists, Errinundera and Ariddia, while also deducing that defensive-minded players can be useful to a team's success. Shortly after, when the MUFN was founded, Guariday became home to Namiri Forest, a club known for their all-out defense as well as representing the city's radical politics. Much later, when the 1./ came to be, Namiri Independent would join them, based in Sharag and deliberately emphasizing a more balanced approach to both tactics and identitarianism. In some ways, the contrasts between Forest's uncompromising stridency and Independent's moderate universalism represent the tension between Guariday and Sharag as a whole. Namiri is the only district with two clubs, and has contributed many players to the national team, among them Rohit Sharma and Saena Mathash.

No other sport commands the same passion as football, but other sports do have standout athletes. In the 7th Summer Olympics, Roshni Joshi (Namiri District) won gold in the women's 58 kg weightlifting event, setting what was then an Olympic record by lifting 244 kg. (Although it has since been surpassed, this is the only sustained Olympic record set by an athlete from Zwangzug.) That same day, Parveen Chandoy (Vetlass District) took bronze in the women's 100 m backstroke swimming event. As was noted by the occasionally-satirical Kerlagrad Courier, an independent "Greater Namiri"/"southwestern" "nation" would, by seceding, be a more successful Olympic association than many--including the rest of Zwangzug at that particular event.

The Surairo Serpents, in Nevelis, claim to be a Quidditch team. According to "wizarding lore," magical students tend to study with a pasagru or mentor mage for individual meditation rather than attending an academy, while Desai Vendaki is perhaps the oldest wandmaking tradition in Zwangzug, but the rest of us "no-Majs" have no idea what they're talking about.

The Guariday Guardian is the region's paper of record, if unashamedly partisan.

Guariday, while a populous city, does not have a significant "downtown;" instead, it is rather sprawly and flat (although there are indeed a notable number of treehouses). It is often difficult, even for locals, to identify where the "city limits" give way to suburbs.

Sharag is connected to other metropoli via the InterCity network; IC 13 from Chettiar Station runs north to Spenson, and IC 22 and 23 from East Monorail Station run east and northeast to Mockba and Hope City, respectively. Guariday is not connected to the InterCity; the main route there is the Namiri Shuttle, which connects it to Sharag...almost entirely underground, to avoid disturbing the rainforest. Many tourists hoping to actually see the rainforests have reported frustration from this bait-and-switch.

Namiri District has been a Liberal Conservative stronghold since the party's environmentalist foundations. The current representative in Parliament is Pramoda Misra, of the LCP; he was one of the "spies" in the anniversary "resistance" incident. Rahm Chandrasekhar (LCP) is the representative from Vetlass District--his and the party's leadership there is said to be one of the factors making at least some of Vetlass considered culturally "southwestern" rather than "southern" by Zwangzug standards. Shashi Iyer (LCP), former mayor of Airiso, is the representative for Nevelis District, and strongly in favor of the Guariday Guardian's attempts at translating cryptic crosswords to languages that don't use the Latin alphabet. Because of the instant-runoff system, there are several far-left minor parties are more prominent in Namiri than comparatively major parties; for instance, the Freedom Congress party is essentially limited to Namiri District. The small Гармония Альянс occasionally appears in southern districts as well.

During the 7th Summer Olympics, Ravi Coursh and Omid Saab were two of the members of Guariday's city council. Kavita Tamboli served on the council shortly after, before being appointed as ambassador to New Azura. Maryam Harris-Etessami, the mayor of Guariday, was the Liberal Conservative candidate for Composite Minister during the election that saw Erin Splinter take office; Harris-Etessami won a plurality of the vote in the first round, but was eliminated in fourth place during the instant runoff.

Though somewhat exaggerated, the stereotypes of the southwest region in general (and Guariday in particular) as attempting to instill far-left environmental and social policies on the country at large have a basis in truth.

Retrieved from "https://nssports.miraheze.org/w/index.php?title=Namiri&oldid=23466"
Category:
Cookies help us deliver our services. By using our services, you agree to our use of cookies.